0
1.1K Views
4
Warning: json_decode() expects parameter 1 to be string, object given in /nfs/c05/h04/mnt/82736/domains/gcnarratives.com/html/wp-content/plugins/posts-social-shares-count/classes/share.count.php on line 66
0
Shares

My name is Gilda Jowers. What I remember about my childhood in  Greene County and the Civil Rights Movement; when I was a child Greene County had at least, that I can remember at this moment, fifteen schools. Education was very important in Greene County. Every neighborhood, every community, had schools.  Before my generation people really didn’t have the right to read and to be educated. Living in the forties, fifties, and sixties education became the thing that was going to set us free, we felt that the only way out of poverty was through education.

Greene County was a farming community. Most people lived on someone else’s property. They were sharecroppers and worked for some of the larger families within the community. When the Civil Rights Movement started I can remember a day at Carver and I was on my way to the gym to my classroom, Willie Fluker told me, “It’s not going to be any school today Gilda.” And I said, “Whatchu mean it’s not going to be any school?” He said, “Everybody is gonna go to the cemetery. We gonna fight for our rights”, the student government was leading the plan of what the students should do.

So sure enough they found a chain somewhere and they chained the doors of the school down. The teachers were inside the school, they were chained inside the building, but they also had it chained so that none of the students could enter the building. All of the kids left from the school and went to the cemetery that’s in front of First Baptist Church and at First Baptist Church everybody was sitting there gathering. They started singing songs, talking and stuff and we had been seeing things about Martin Luther King and the freedom fighters and all of those things and that was the day the students and the children decided freedom was gonna come to Greene County. But what young people didn’t realize in the moment; when you look at things, there are consequences to all choices and all decisions. If you living on somebody else’s property that means that those families were put off that land. So by the act of a child the parents had to suffer and sacrifice. I remember when we left the cemetery,  we went across the street to First Baptist Church people in the community made bologna sandwiches and peanut butter sandwiches and different things that they had and they fed the students that day. We left from First Baptist church and we marched around town square, uptown and people were coming out of those stores and in a small community where everybody knows everybody. They would call somebody out by name,” You betta get out that line”. And they would talk to those children because they knew what they were going to do to their parents. So the children just completely ignored them and they continued to march and sing the songs and from that day it’s actually what I remember was the beginning of the Civil Rights Movement. People always talked about the heroes and things like that but there are so many unsung heroes that people never thought about. When the families were living in tents , somebody had to wash people’s clothes; somebody had to cook food when people had no money people had to give you a little change, a little money because all of it was a sacrifice you had no  way to feed and care for your families, you were helpless and the Klan was strong and riding around. 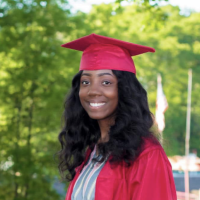